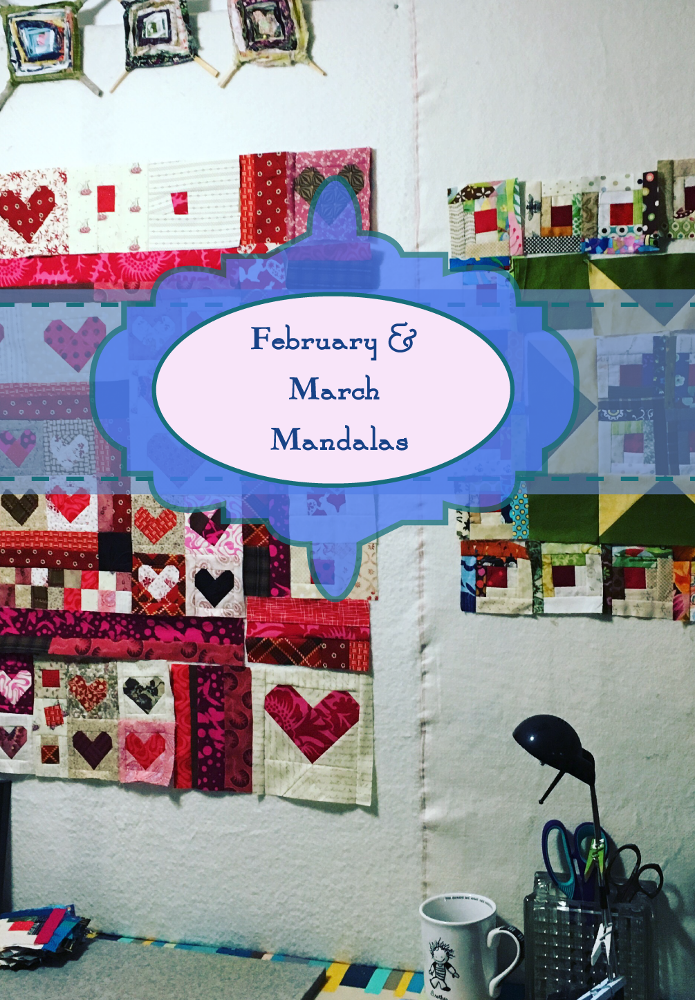 Well, late in the month, but Not the Very end of it.

Spring has officially started, and here in the Pacific Northwest US, it is a typical rainy day. We found some daffodils popping up in the lawn and that made us both very happy because we were already planning on planting 100-200 bulbs every fall until we have a glorious ring of daffodils on the edges of the woods around us. Someone else who lived here had at least a similar concept in mind maybe. That is a cool thing!

I thought today I would talk a little bit about my progress on my crazy Mandala of the Month Project for 2021.

For starters, we are on target still, even though February is LATE, March is done EARLY!

Here are some of the fabrics I started with for the February Mandala. I ended up not using some of these, but this was my initial pull. Better fitting fabrics kept showing up as I was digging through the stash. 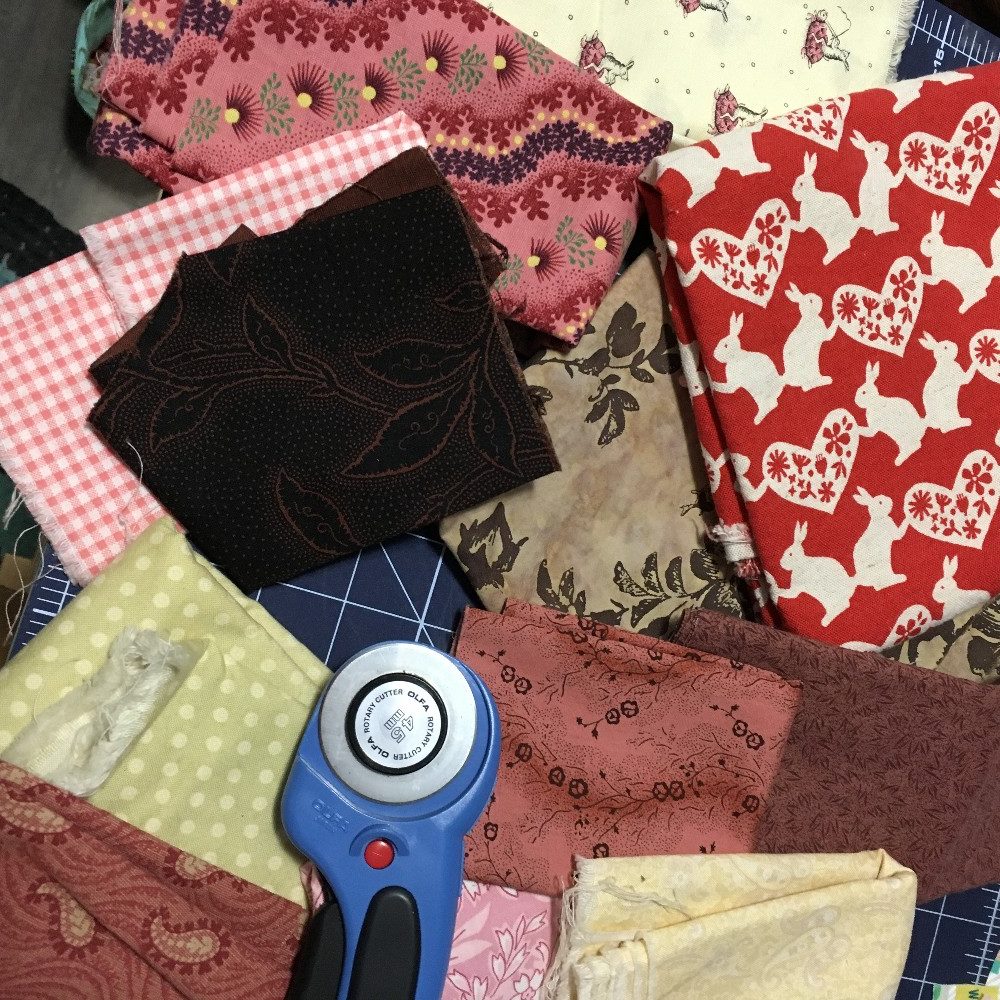 I knew that I wanted to start with these hearts – they were a design concept by Sandy Bonsib in her book Folk Art Quilts from many, many moons ago. 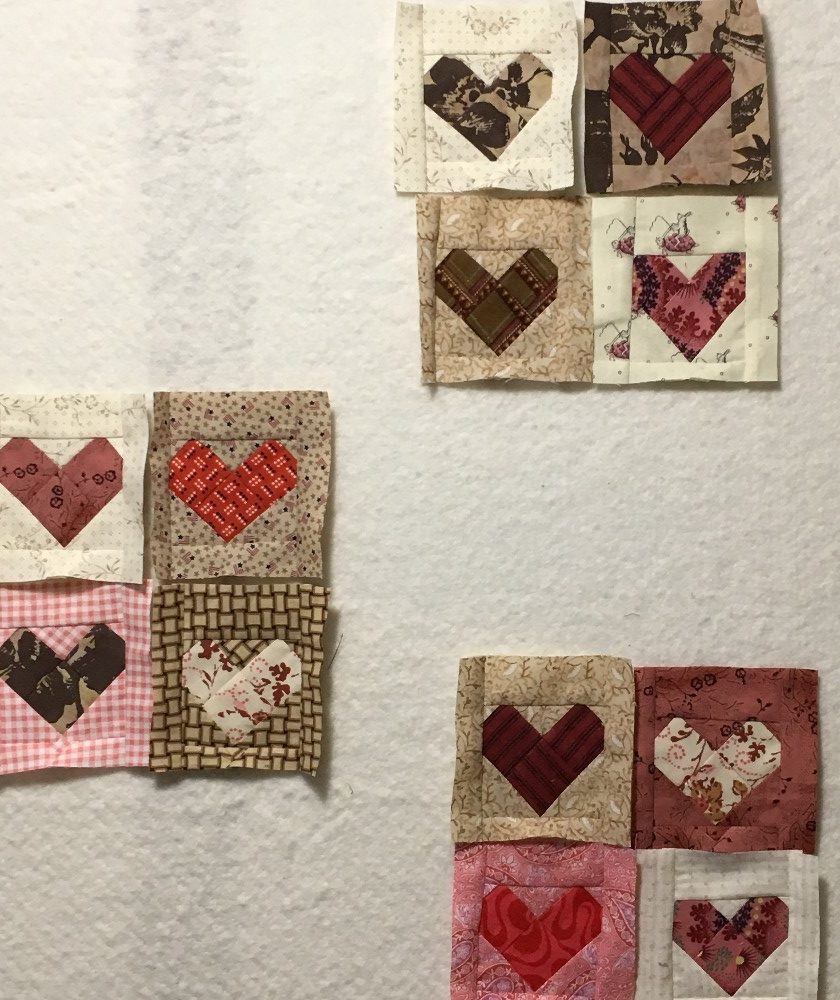 These hearts are among my favorite to create, and I fall back to using them all of the time! You can also see I pulled out many of my old  “country” fabrics, but also used new ‘modern’ prints and batiks! 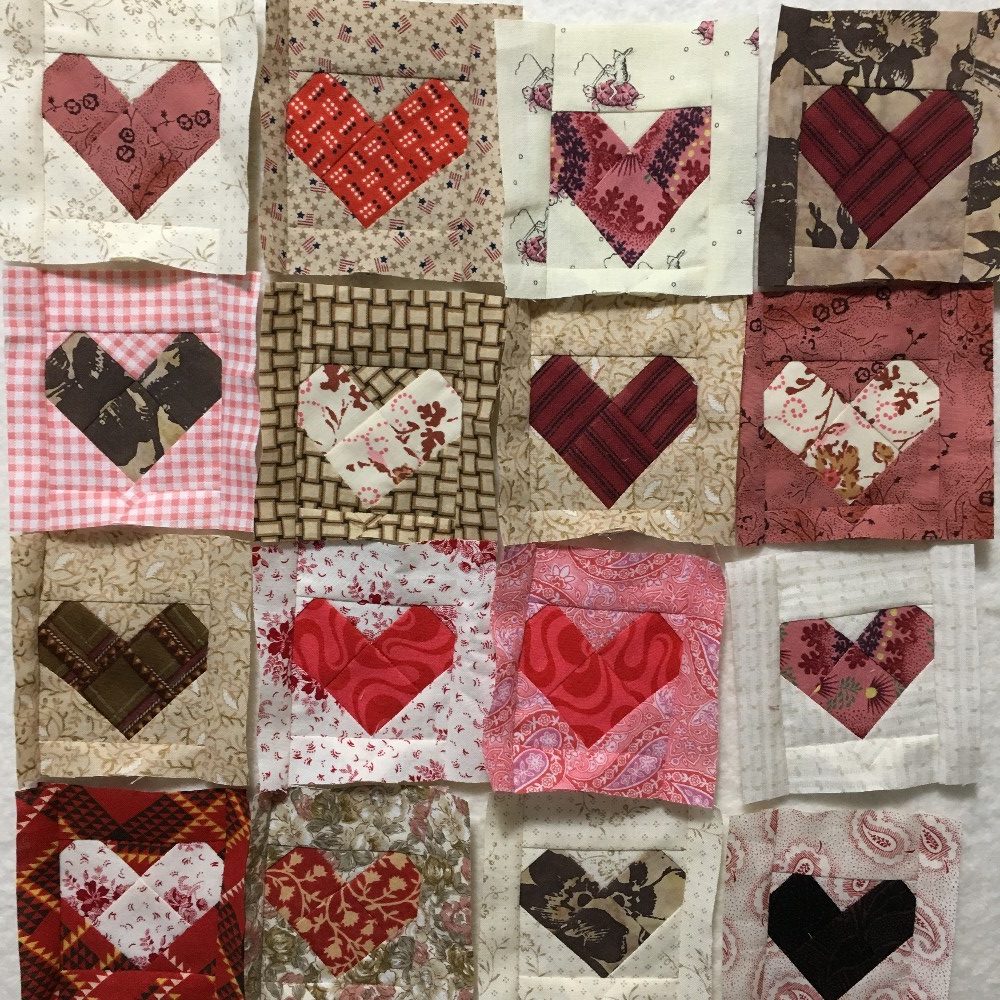 And then I had to throw in some random checkerboards, right? 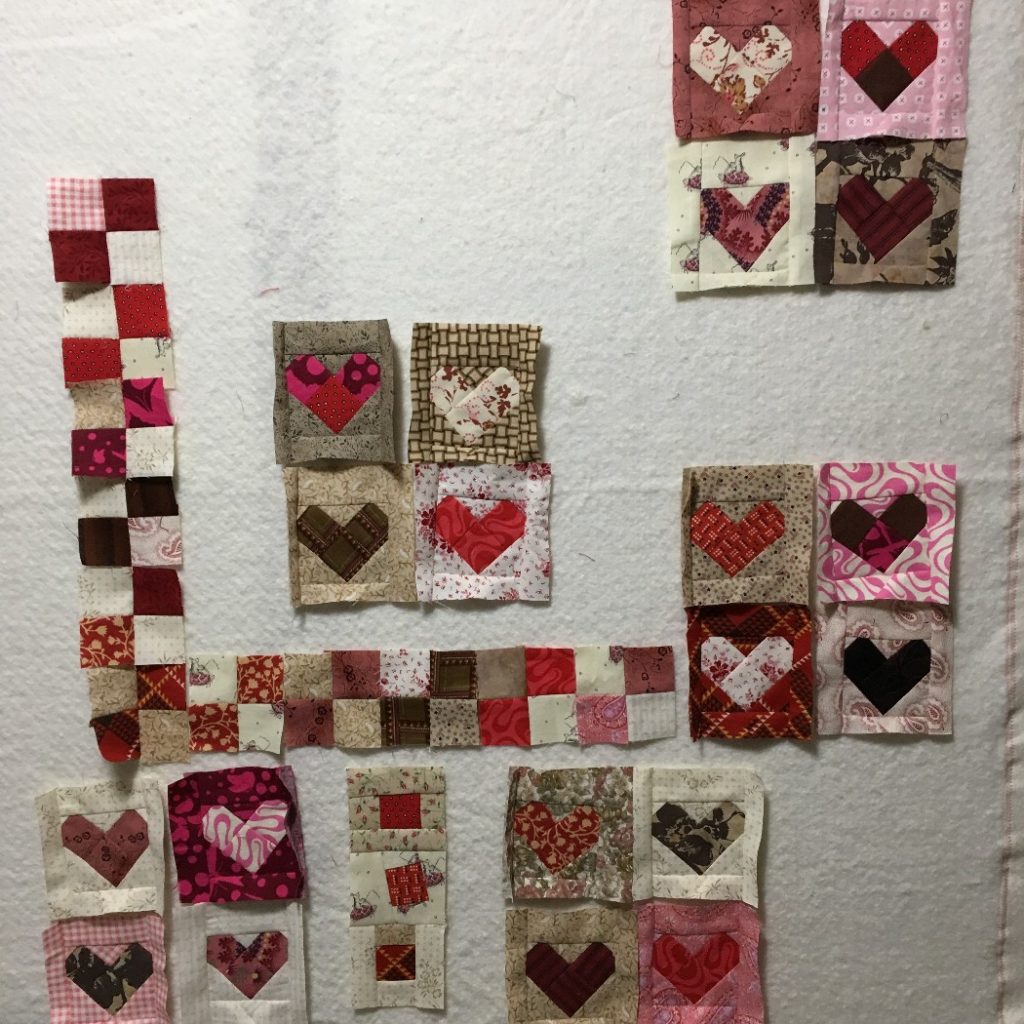 Mandalas by design have a center and radiate out, right? That’s my idea of them at least. I will confess I have not looked it up, I just went on that assumption. Basically a Medallion of sorts, they seem the same to me.

So I defined the center of the February Mandala of the Month to be a bit off-center, much like much of real life can be at times. But I wanted to define the rows  (or rings) a little better than the January Mandala ended up.

Here is February almost done next to the beginning of March  …. because well, I was LATE on February…LOL…. 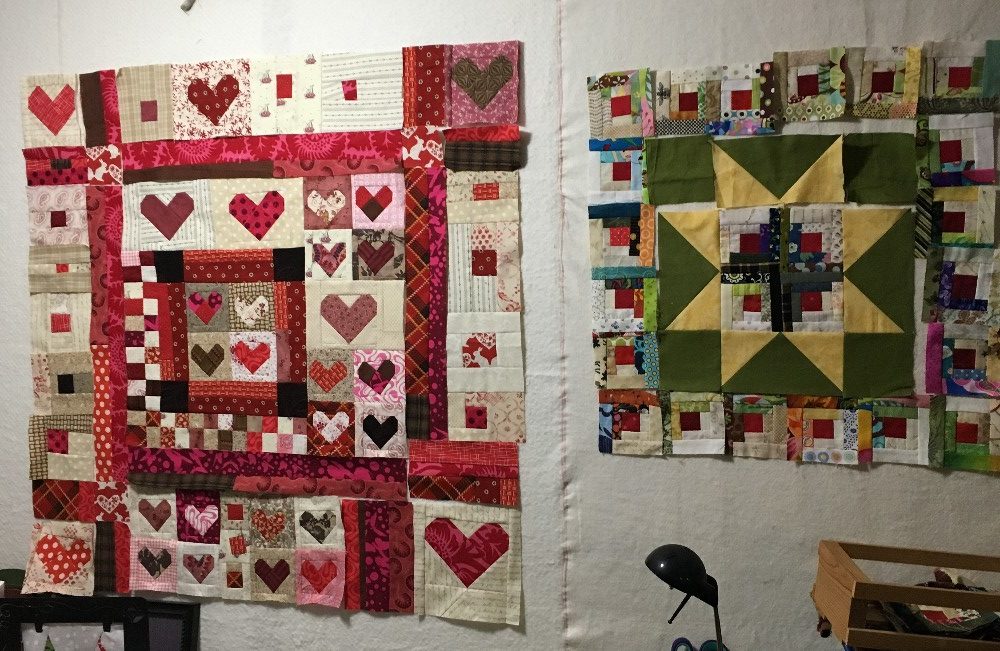 And here is February all locked in. I really loved all of the little floating hearts and the randomness of the squares. I had an overall plan for this quilt, but also let the blocks change things as they grew. With no preconceived idea of how many floating squares I would need, I just used them from the scraps from creating the hearts.  I knew I wanted pieced strips for the ‘hashtag’ like border, but had no idea what they would look like. The little brown rectangle in the upper left corner is particularly pleasing to me for some reason!  😀 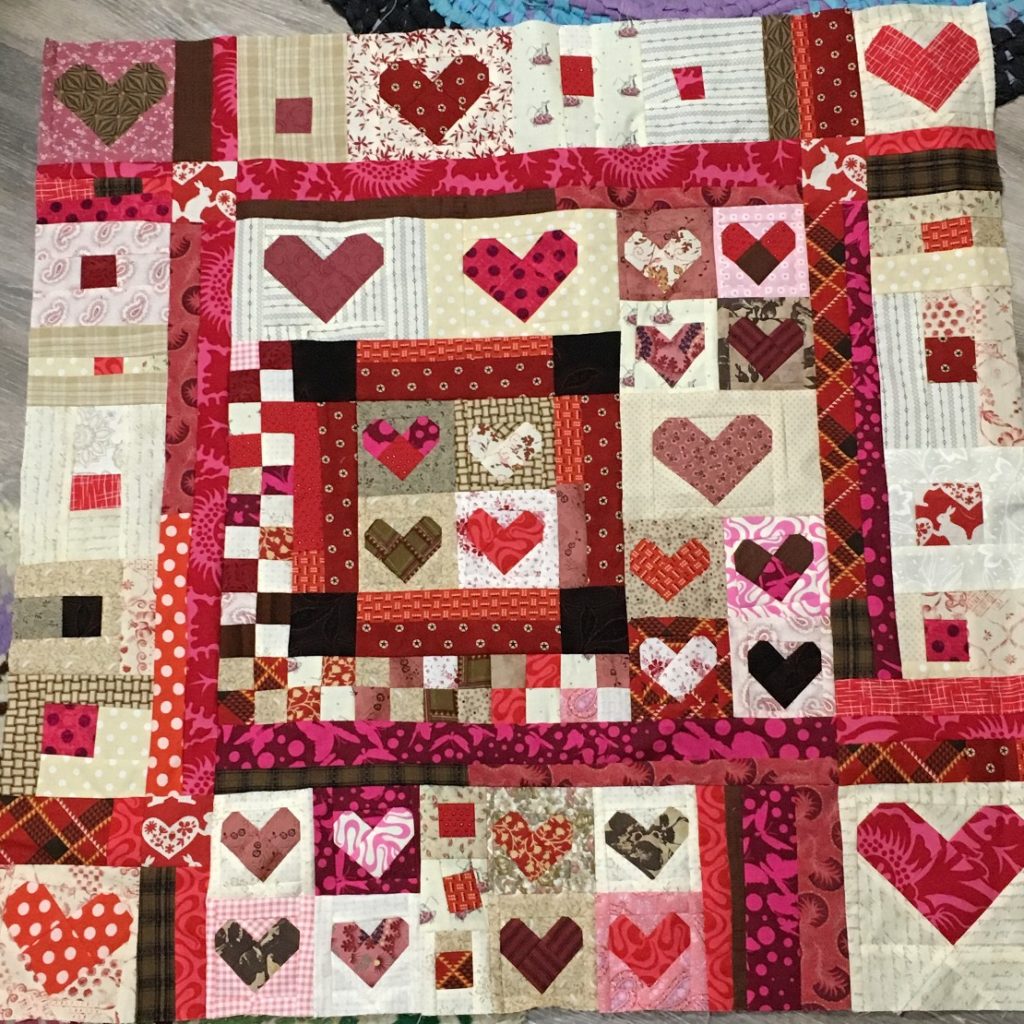 And now onto the March Mandala of the Month

The March Mandala went so fast because I had all of these little 3 1/2″ log cabins from a swap I participated in years ago. I originally wrote that my plan for  March would be created from my massive scraps piles, but in a sense these were scraps too because they NEEDED to be put into something. When I found them from unpacking, I decided now was the time.  I still have a lot more left as you can see some of the extra off to the side of this photo. 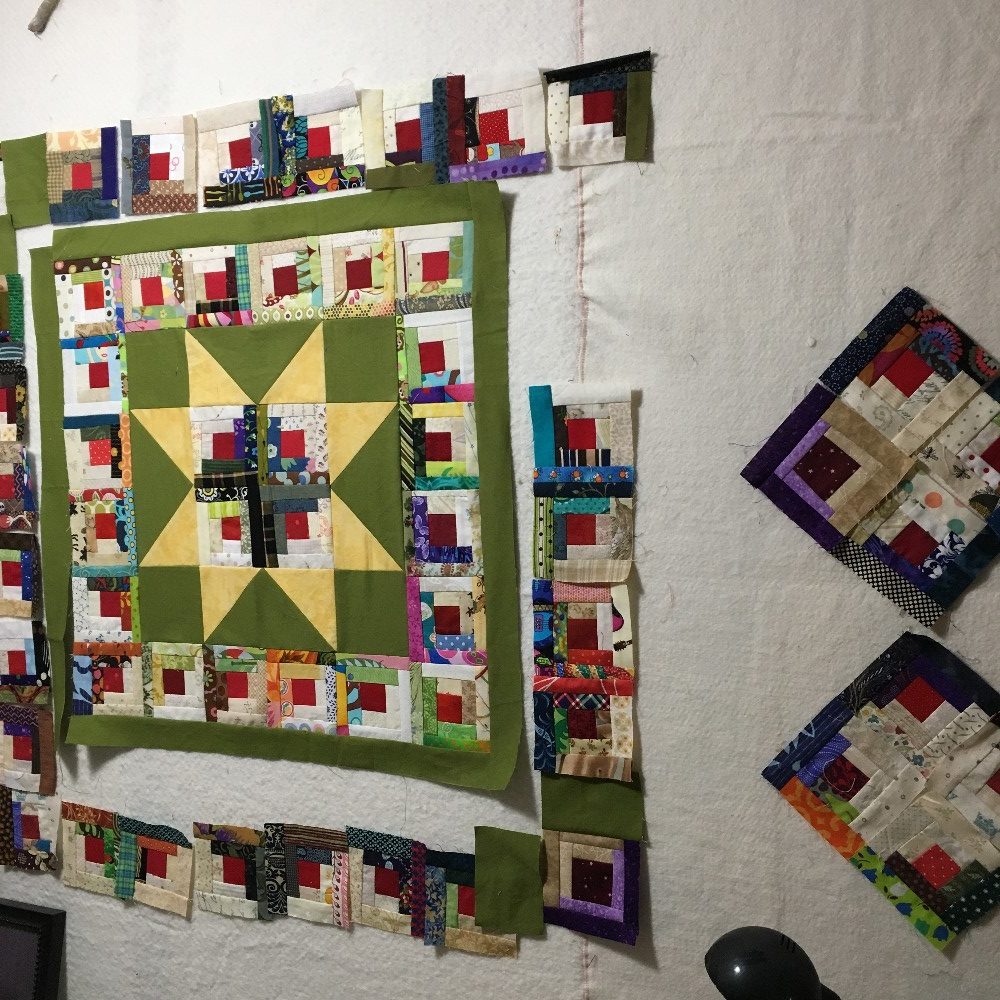 So I sorted the log cabin blocks and loosely arranged the lightest ones closer to the center and the darker ones to the outside. I set them in two different formats as well. It is kind of fun to look at them to see the pattern. I love the versatility of a log cabin block! I decided to make this Mandala more concentric with a much more ‘centered’ center — Not that my life is anymore centered to be sure, but just because this seemed like a good idea as the time.

Then I did a little poll on Instagram for how to arrange the last border. This was not my first choice, but I thought, hhhmmmm, interesting… This arrangement got quite a few votes….. 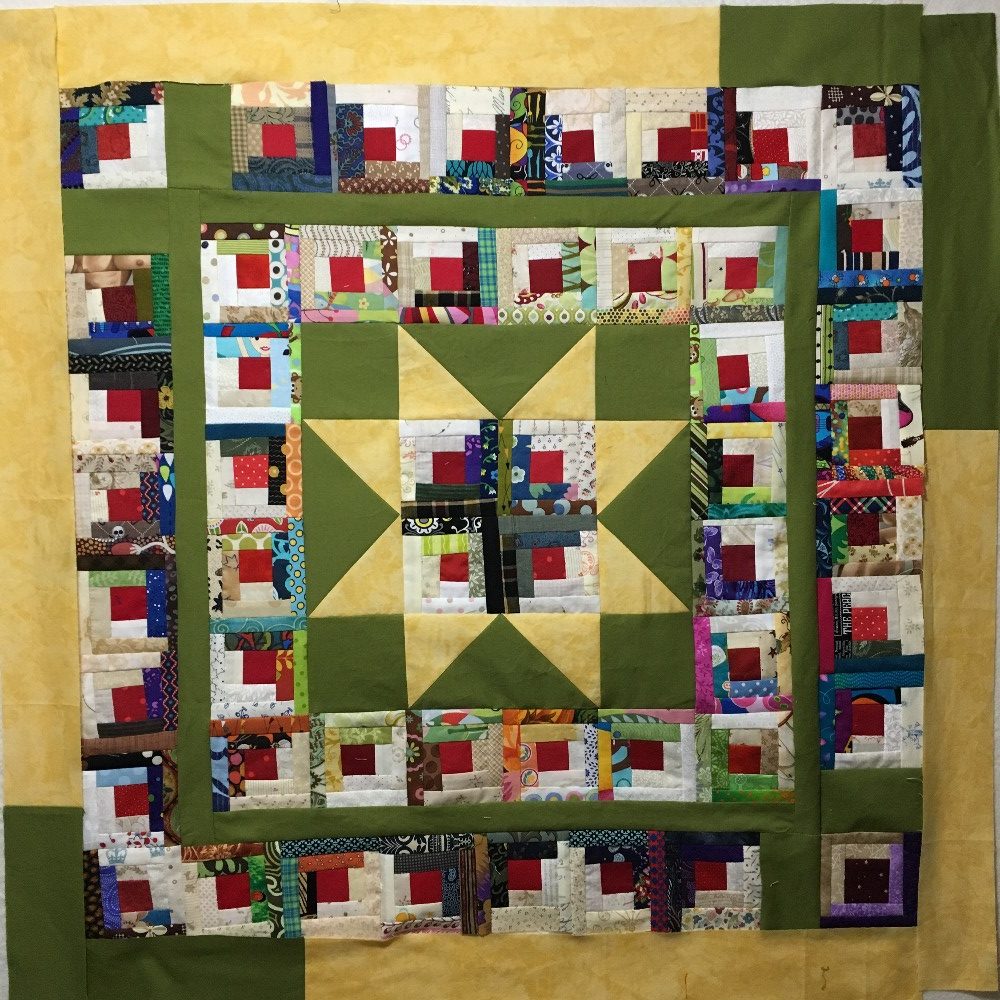 But this, my original idea, got the most votes, INCLUDING Linda’s, so yeah, it won. This is the finished March Mandala of the Month top. I need to get all three of these (January included) of to one of my long armers, so I can bind them & keep the momentum going! 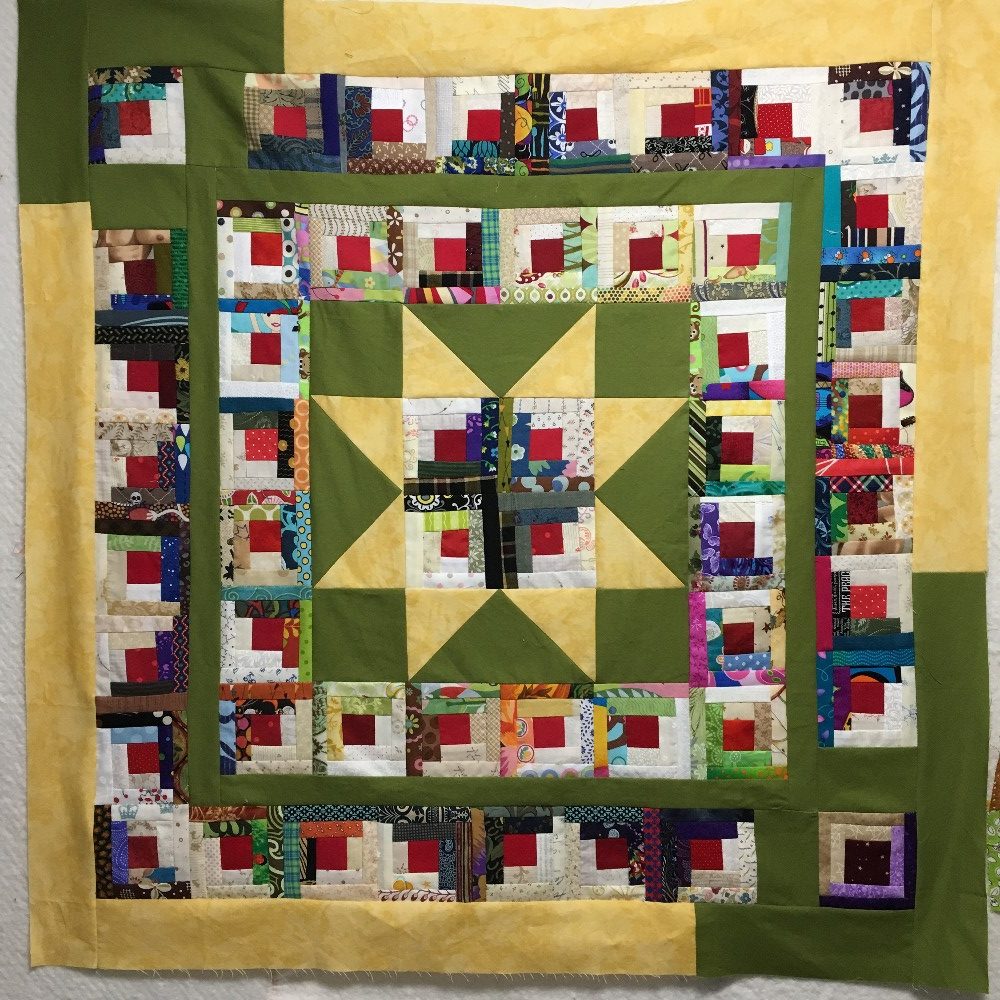 The April Mandala of the month is scheduled to be ALL greens. I am pretty sure I will be using a lot of hexagon shapes in it. I am also doing a mystery quilt with OLFA over on their website next month. Working on that Next, so watch for it on OLFA and on my Instagram account.

Let me know what you think of this project in the comments. If you have any questions, post them there too and I will try to answer them in the next post. Love y’all!

That’s it for today!