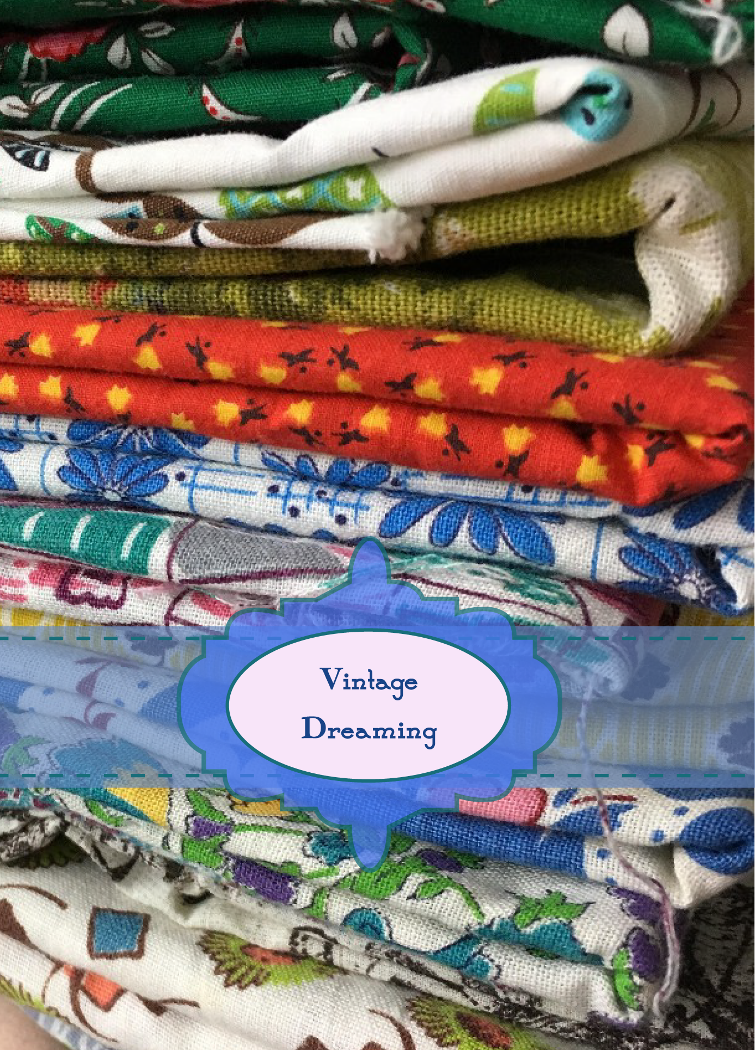 I admit it. I have been waxing nostalgic over  the 1970’s over the last year or so. Would I think back so fondly on that era now if I had been a grown-up then? I am sure I would not, but I was 6-16 years old in that decade, and I VERY  much miss the innocence and wonder of those days, especially the beginning of the decade.

As Christmas approached this last fall, I was having a really hard time handing my missing of those years.  I was missing my mom as well as all of the times we had as kids with Mom and my Aunt’s family and my Grandma. Those three ladies were not fancy, but they tried to make life enjoyable. At least in my memory. I really don’t remember mom ever getting mad at us….. probably ’cause Dad did all of that.  🙂

I was pretty upset when I was telling one of my cousins how I missed those ‘good ole days’ and he said to effect of  — “that’s how it is, the past is the past” – no indication that he missed them too or anything.  I was already feeling low and that stung, even though, yes it is true.

I recently went and got some great counseling to deal with those feelings I was having and though I still do have those thoughts and feelings occasionally, I am doing better at coping with them.

Which in a roundabout way brings us to today’s topic! Even though I can’t bring back my mom, her sister or their mother and all the good times with them and my dad and uncle and all of the cousins, I can enjoy and play with fabric from that time (and the decades before!)

When I started thinking about this post, I had seen in my stash a small collection of late 60’s/early 70’s calicoes that I was going to photograph for it……can’t find it now! hahaha! But I did pull out these vintage beauties, which would have been around in the 70’s as most of them were 20-30 years old then…. and my mom and grandma saved everything!  I will talk about some of them in the photos below. If I don’t mention them, you can bask in their glow… particularly that yellow one! 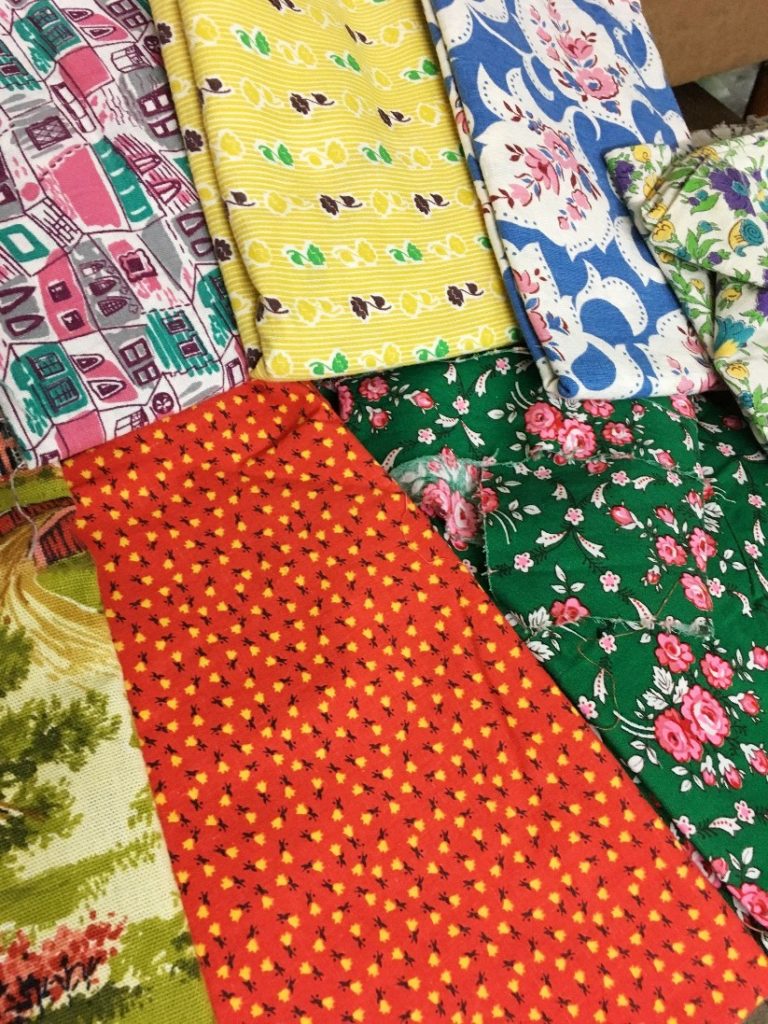 That bright red calico above is something I bought, but I know that I have some in brown with the same yellow flowers that were the curtains in the canopy camper we had when I was little. So they would be late 60’s. We also had some Christmas decorations in this exact red / yellow combo that were new in the 70’s. The green and pink floral print is from a friend’s mom who recently passed away. I am guessing it is late 70’s / early 80’s. 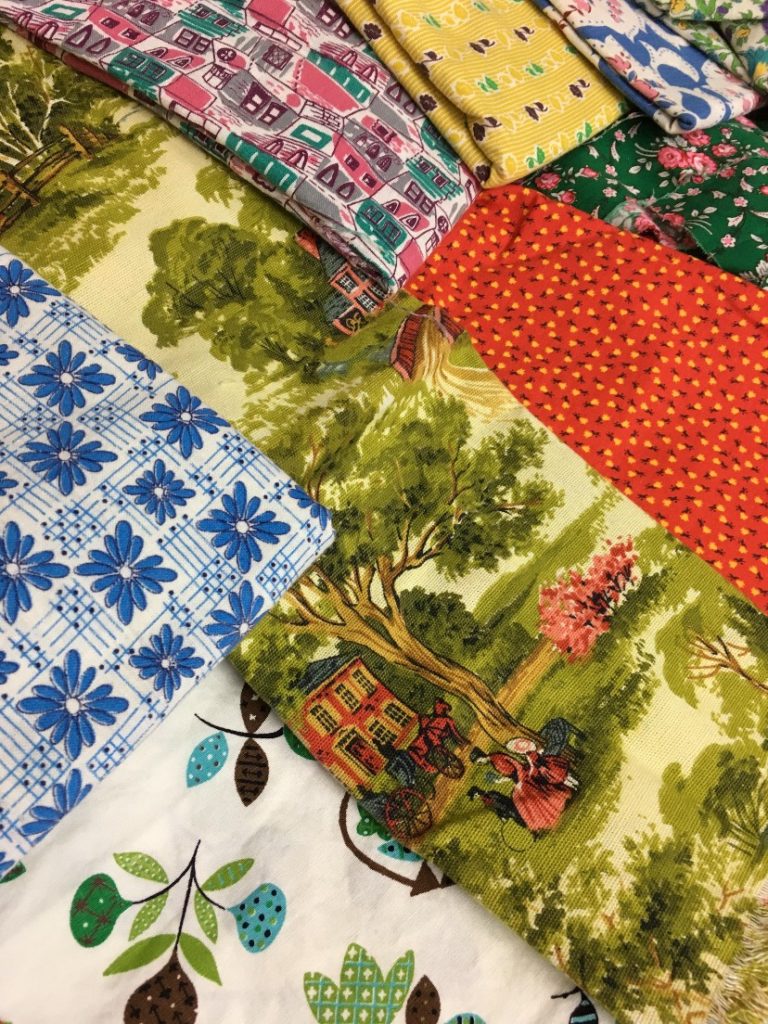 Okay in the above picture, none of them are family pieces, but the blue and white flower print? I could totally see my mom having that around. Everything was very Harvest Gold growing up, but mom was heading toward Blue by the end of the seventies. The mod Blue Green folk art and the very Green Toile prints are very much like stuff my Aunt Marilyn decorated with. 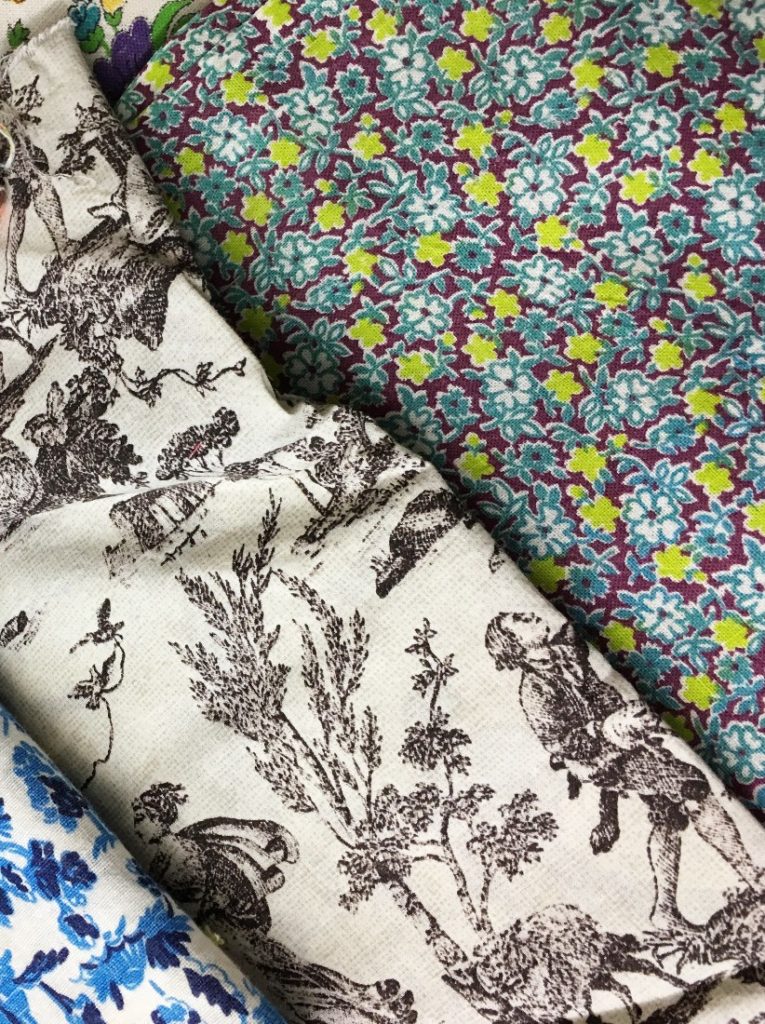 I always love a Toile, no matter the era- and that little floral color combo of Aubergine, Teal, White, and Lime are insanely cool! 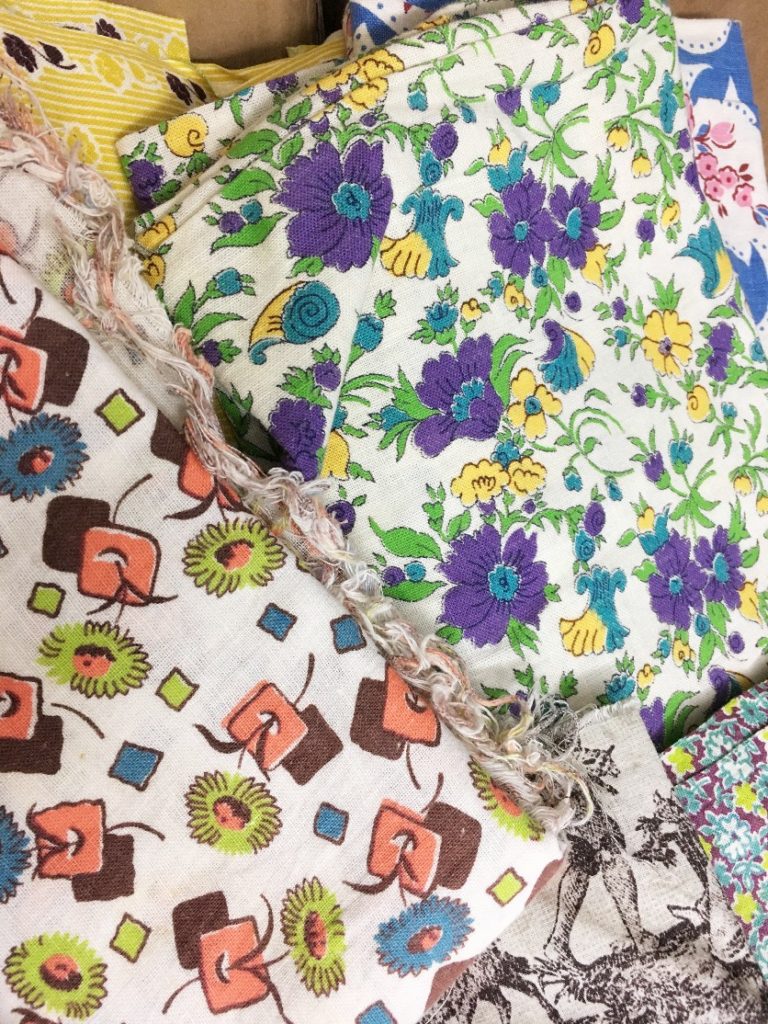 Okay, so none of these above completely connect me to my family. But they are nifty! 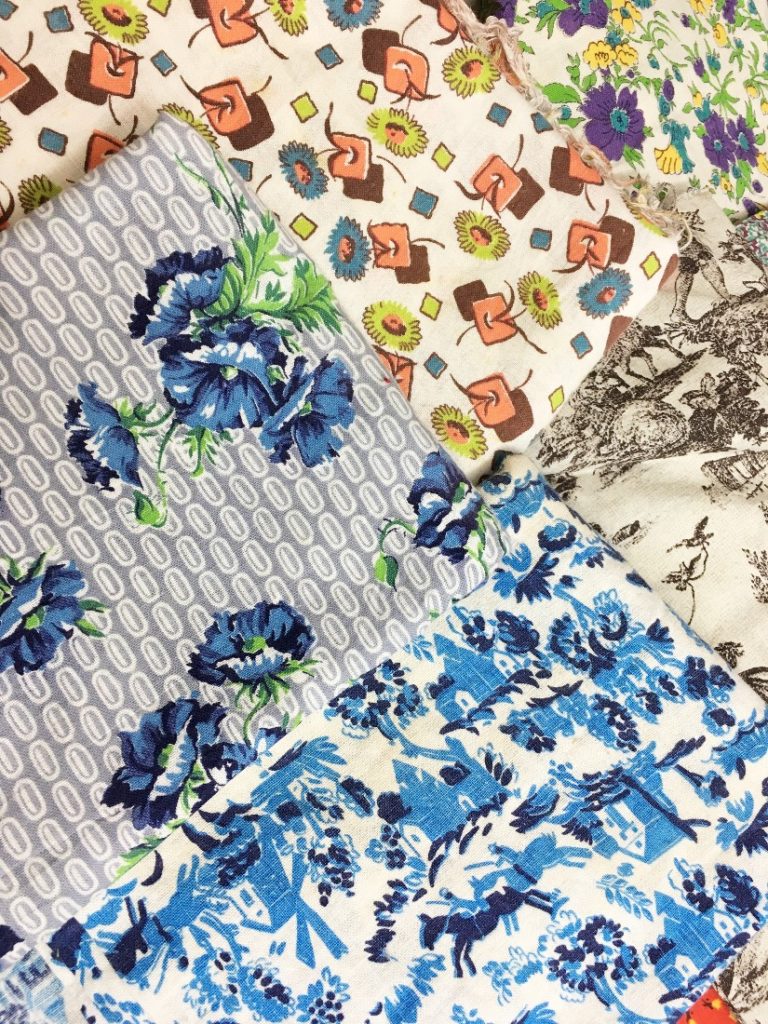 The Blue and Grey one remind me of something my mom would wear. And the blue and white novelty print? I just can never resist little vignettes like those.

And as far as the past being gone forever? Not necessarily true. You know who makes NEW prints that remind me very much of those years I have been nostalgic for? Heather Ross, that’s who! I know there are other people who design in this ‘look’ too. I have just been a fan of Heather’s work for years and wanted to share it here today! 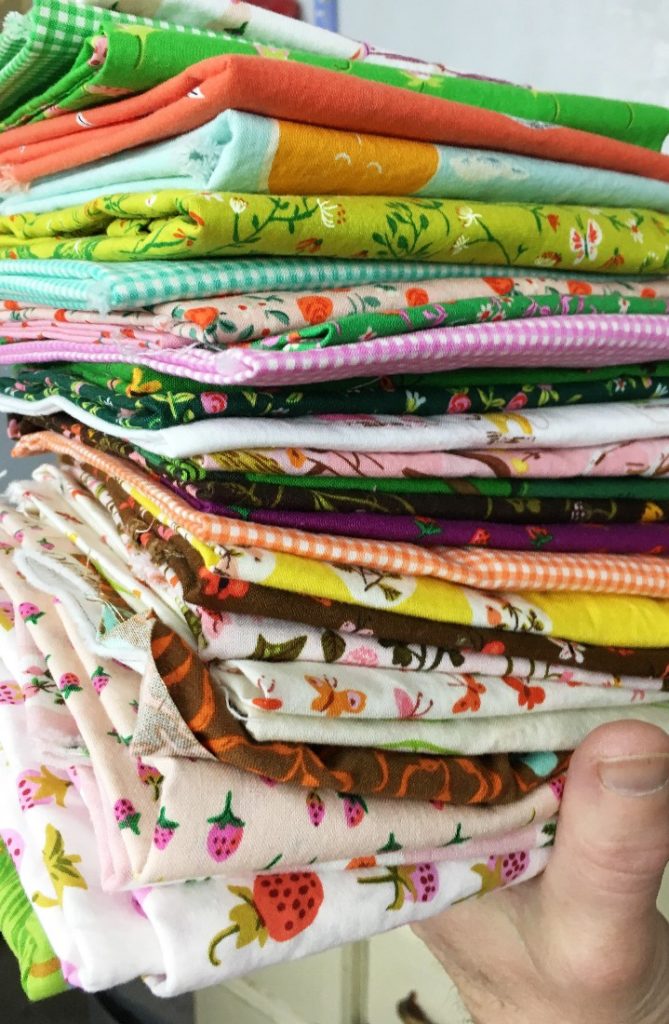 Yeah, Heather’s style seems to belong especially with the calicoes. I have been collecting her fabric for a few years. 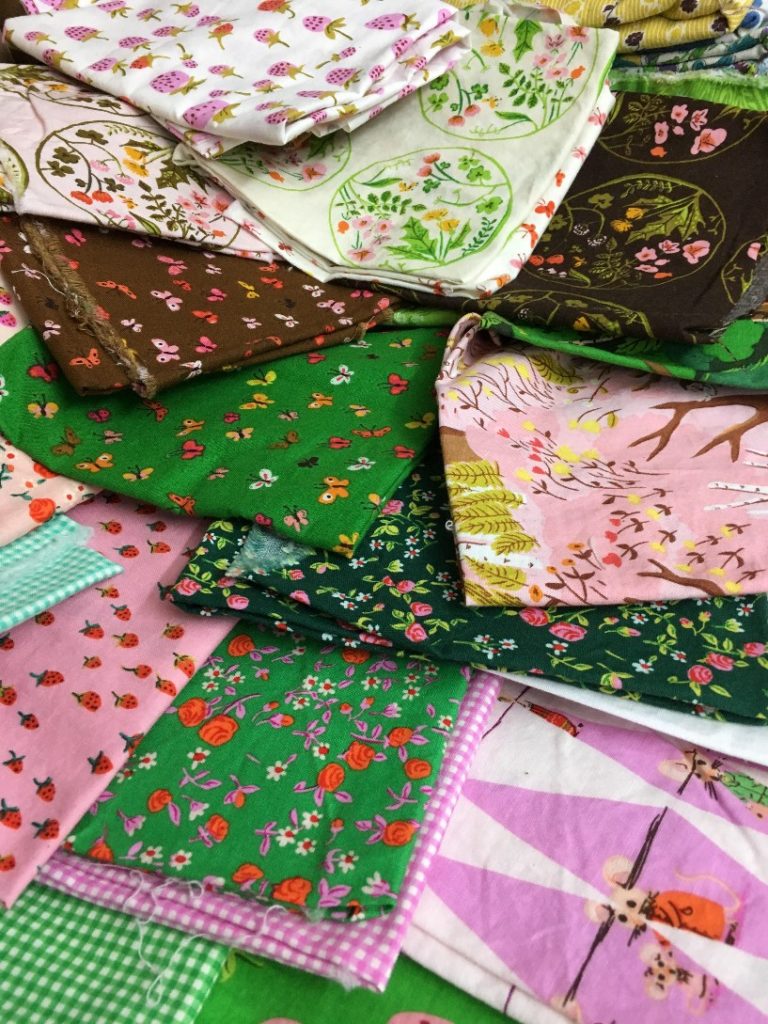 I have a draft for a new quilt design/pattern that will be using these prints along with some vintage pieces. I know they will meld effortlessly. 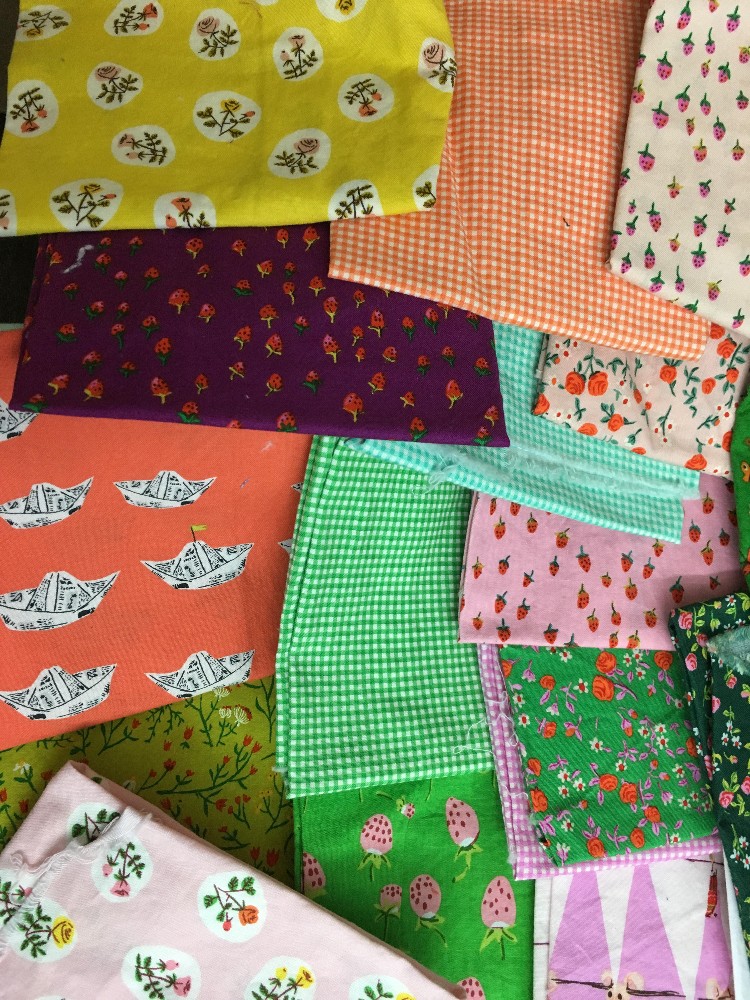 That’s it for today peeps. TWO posts in the same month? That hasn’t happened for awhile!

Thanks for stopping by and making it all of the way through this post!  Please let me know your thoughts and observations that you have made in this area of Fabric Love. 🙂