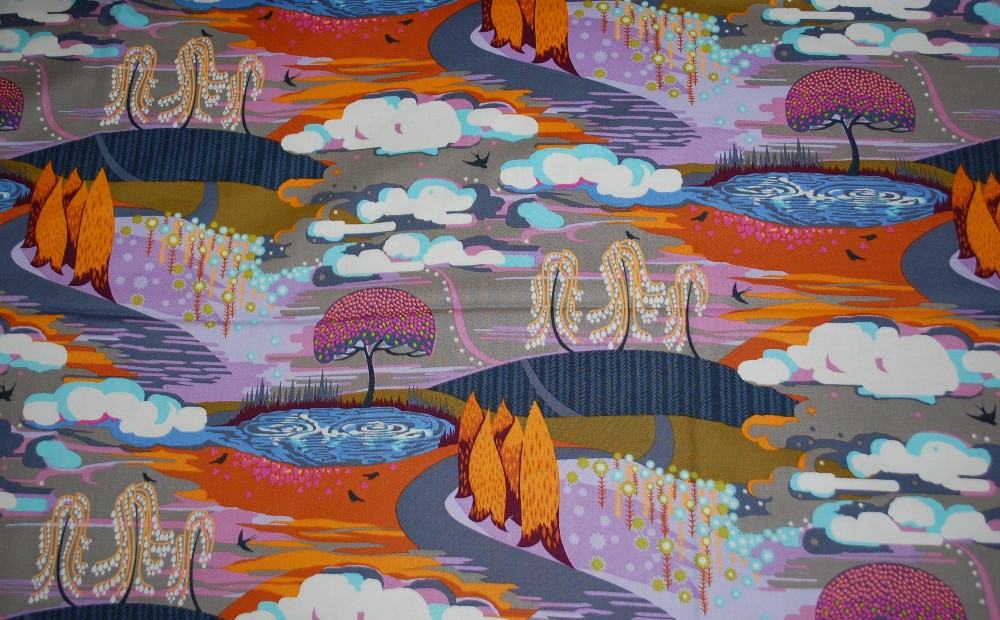 So,  I am back from Quilt Market! I haven’t been since Pittsburgh Spring Quilt Market 2014. I have missed it. But getting ready for Market was just as crazy as ever.  This glorious line Fibs and Fables has been in my hot little hands since August actually. I was supposed to post about it in October with a project, and well, I didn’t start the project because I just couldn’t decide what to make. As some of you may know, I made a shirt… which for me was no small feat….and starting it the week before Quilt Market didn’t give me much time, that is for sure.

Now back to Anna Maria Horner’s Fibs and Fables line! If I say it is Fantastically Fabulous, will you fault me for too much alliteration? When it first got here, I had to take it all out and group it by print design. 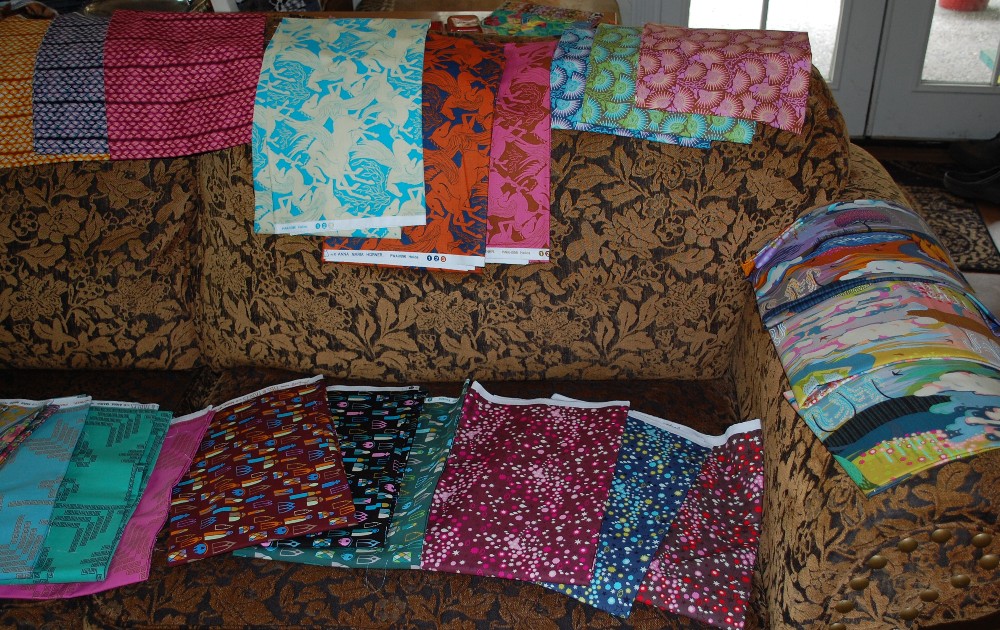 I thought it looked pretty comfortable on our recent Thrift store acquired sofa ($35 BTW)  I had no idea I would be getting this line as part of the One Fabric Nation Program, so I was quite overjoyed as I just love practically everything that Anna Maria puts out there!

I remember one day shortly after I got the collection, I called Anna up and chatted with her about the thought process behind the line. She writes a lot about it here.  She approached this “fairy tale” collection just like everything she does, with deep thought and analysis. She looked at the details that float around every fairy tale book ever written. Glimpses into the life around the characters, not the heroines or heroes themselves.

The two prints above are Dressmaker and Labyrinth. 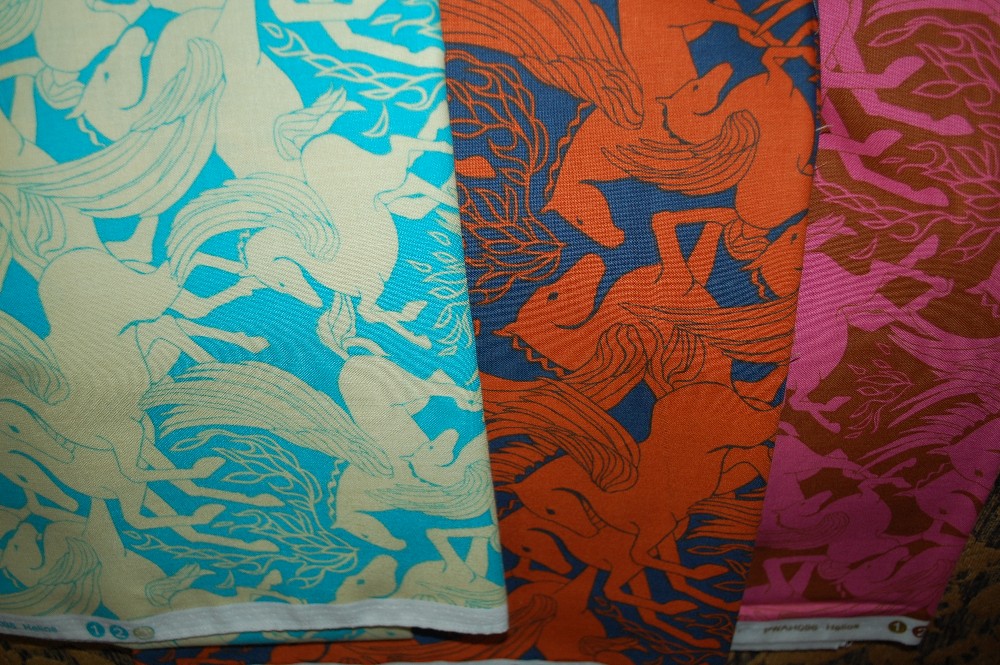 Helios above. Pretty easy to guess that one if you know your Greek mythology. 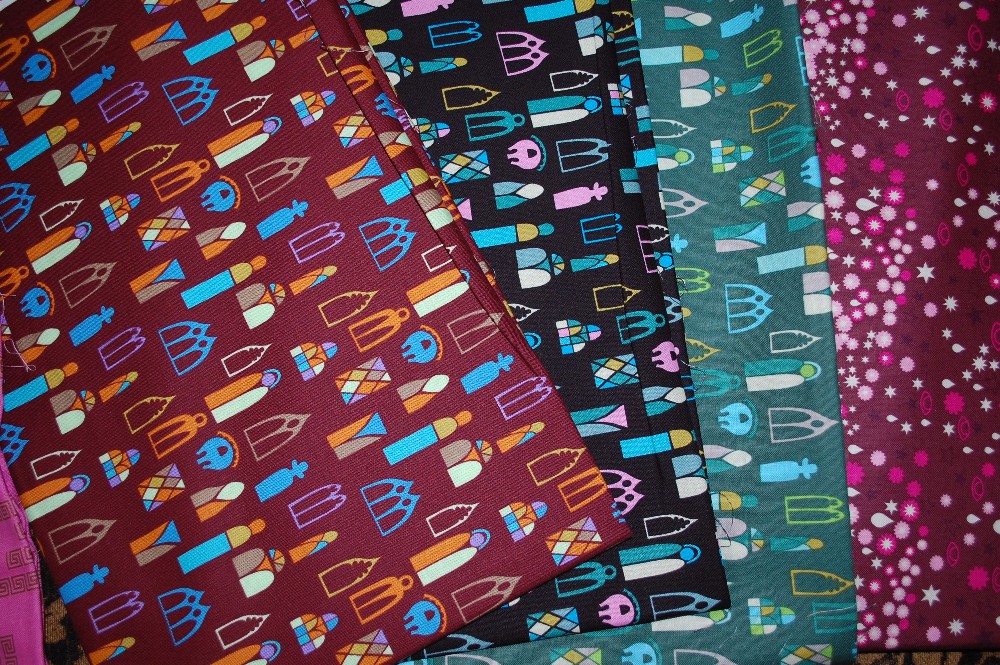 The print on the left is called Escape. I think this one is one of the more intriguing ones because of the name. When I first read the name and saw the print, I thought of churches and sanctuary and seeking refuge there. But Anna said it has more to do with Fairy Tales and the like where people often need to get out through a window to escape the baddie in the story (there’s almost always someone that the protagonist has to escape from, right?)   And that print on the right is called Starry Eyed.  A mix of a whole bunch of different things that Anna told me about…but I cannot remember now! 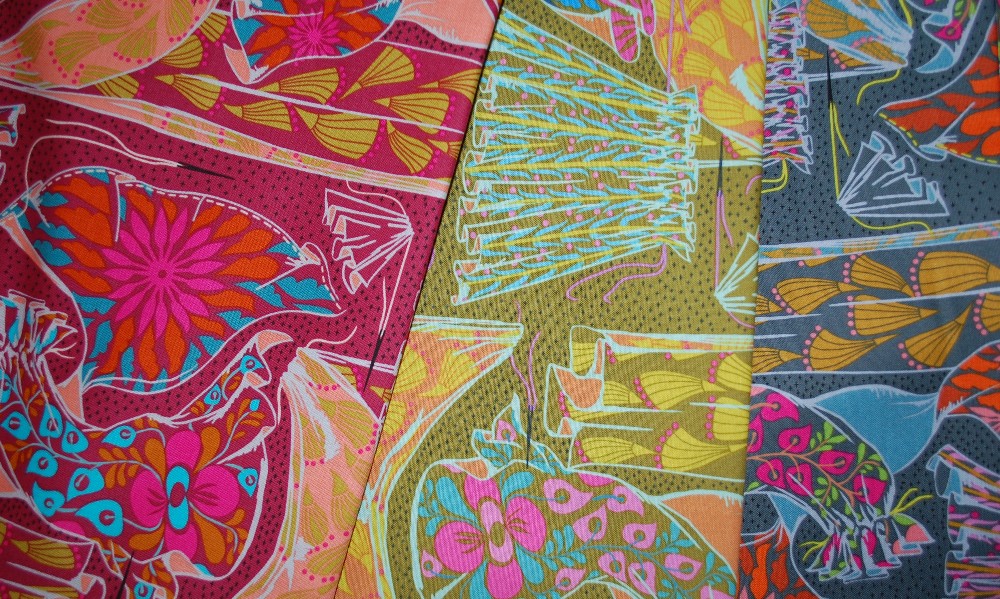 Here’s Dressmaker again. The one Anna calls the “Wild One” 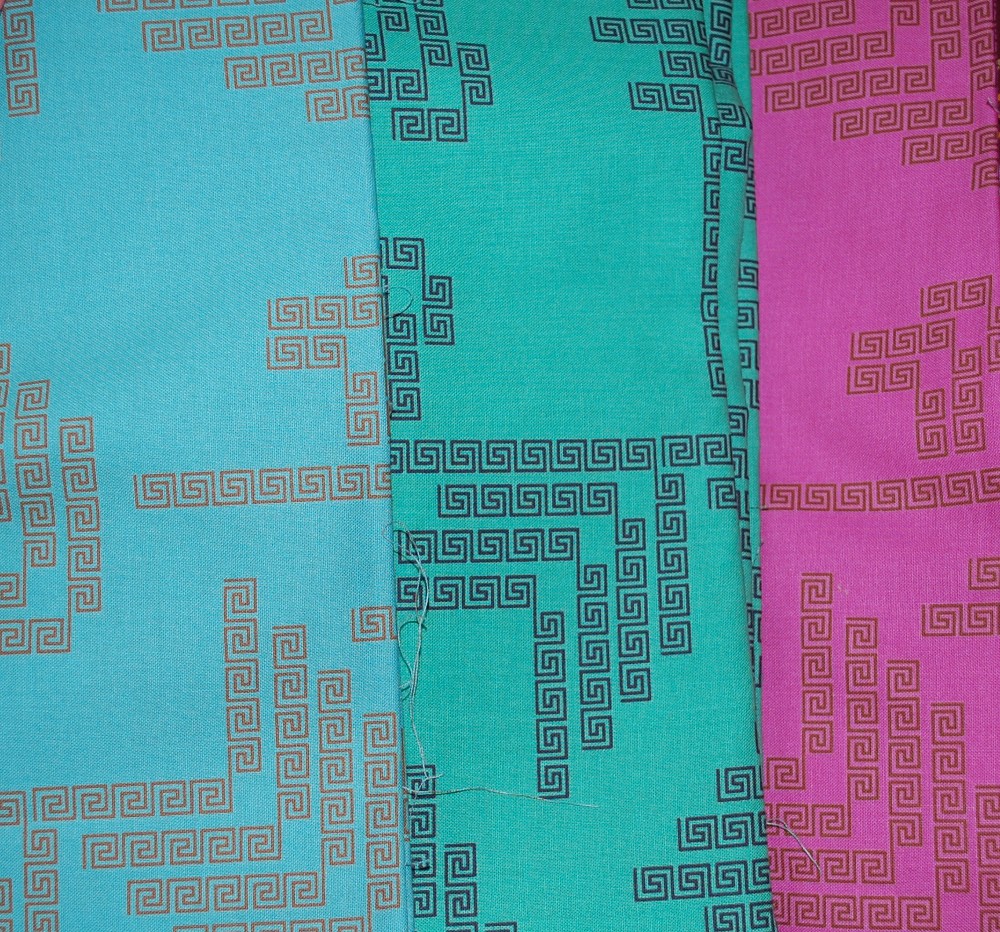 And Labyrinth again…. Greek key pattern. Anna said that a lot of Greek and Roman imagery shows up in the fairy tale books she was researching (the late teens, 20’s, 30’s of the last century). 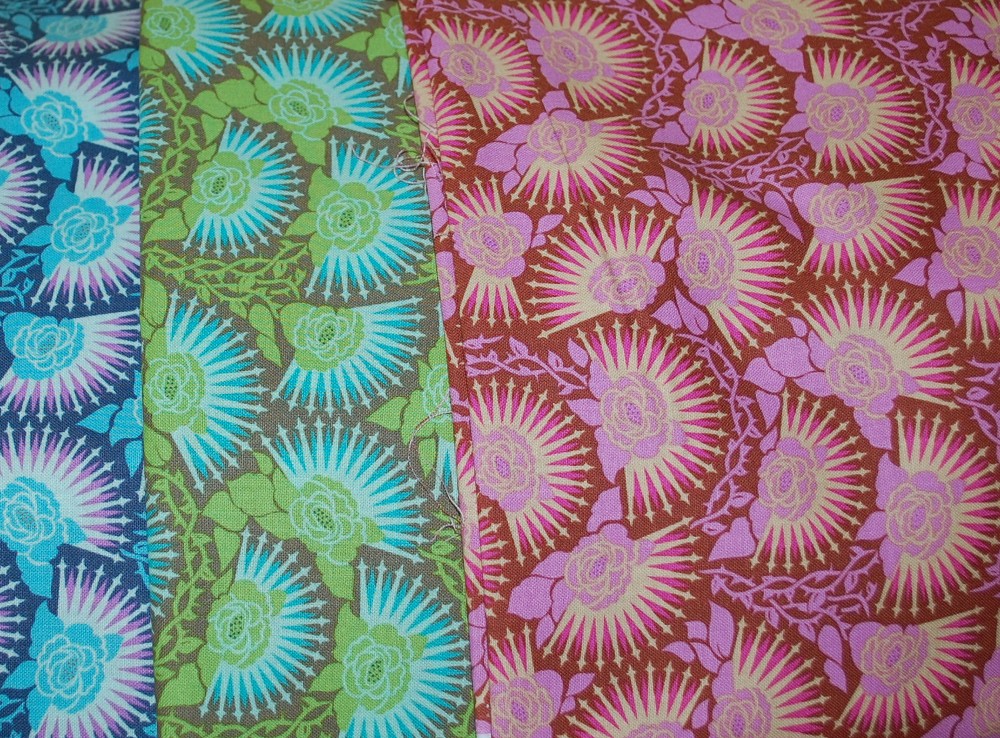 Love this one. Minutes. Time is always a big factor in Fairy Tales and Stories, right?  Usually not enough….. Hey, that’s just like real life! 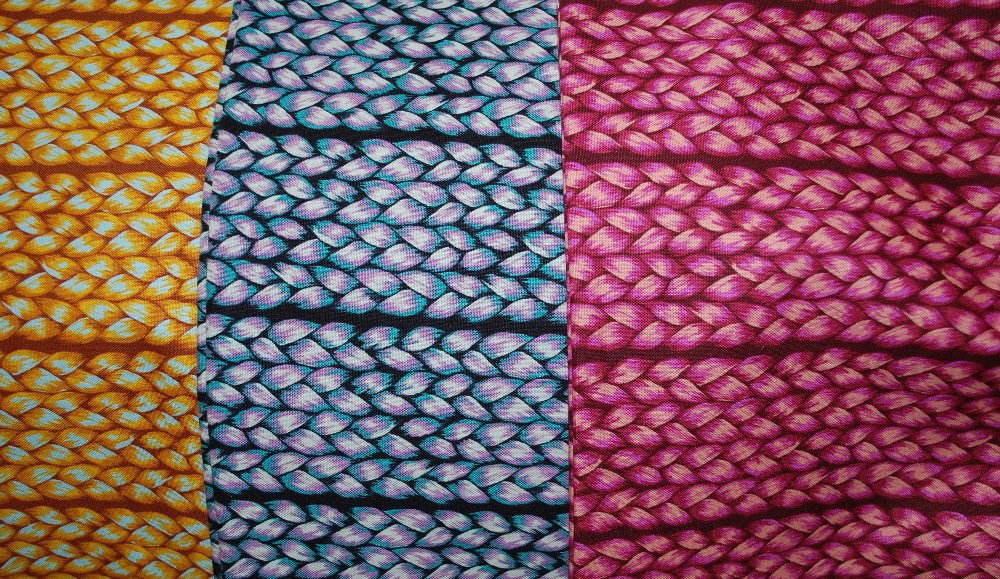 Cottage. Another one of my favorites! Can’t you just see this painted on cottage furniture or in old timey wall paper? It is Great!!

And then there’s Enchanted….Words just don’t do this print justice. This is just phenomenal! Truly! It was the first print I saw when I opened the box and I let out a shout of joy! Seriously I made some sound that it really only could be called joy. This is such a fun print…perfect for backing a quilt. I love these type of prints for backings! 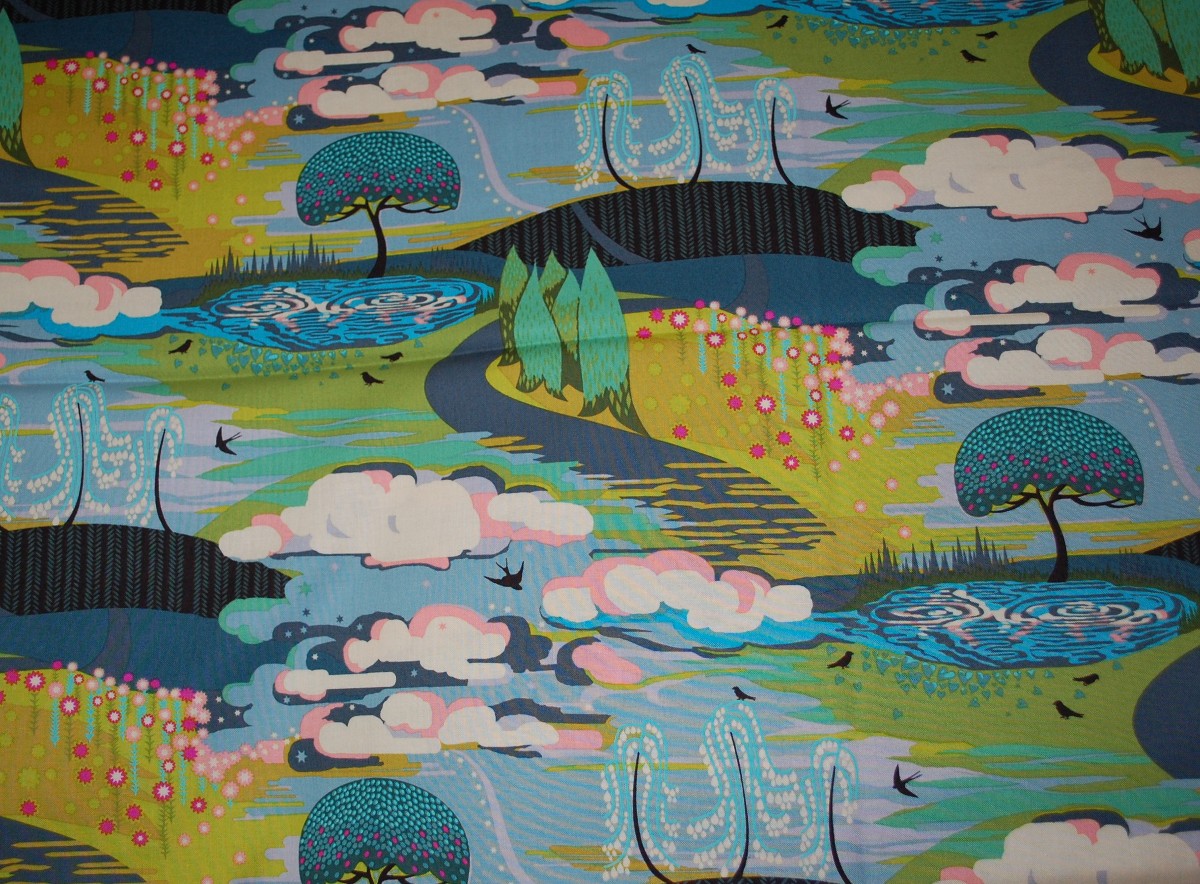 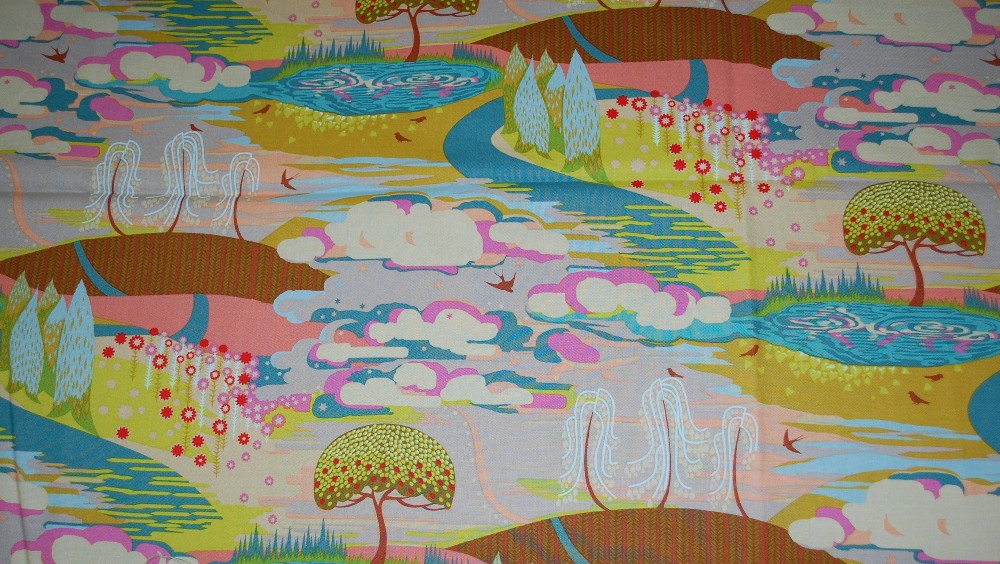 And now here’s the shirt! I made this famous at Market, at least among my Instagram and Facebook friends.  They all recognized the shirt on the first day of Market from my many posts.  I posted quite a few pictures while I was making this. It really did come out okay in spite of some of the little things that happened along the way. Most of the errors can’t really be seen from the outside. 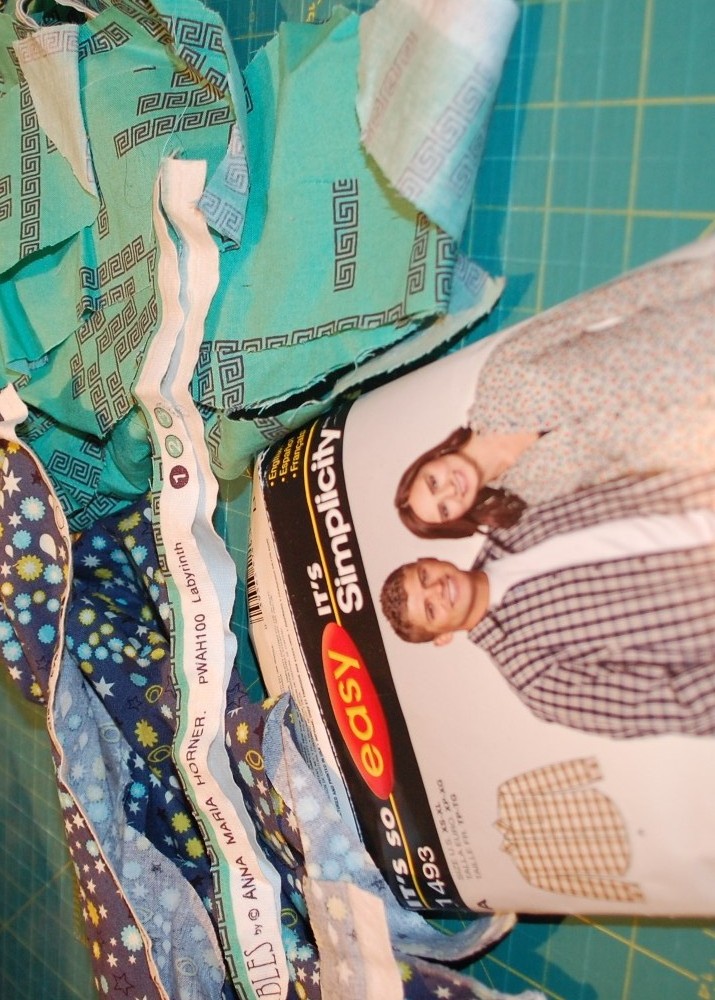 It was Simplicity pattern #1493 and it was pretty easy as far as shirt patterns go, I guess. 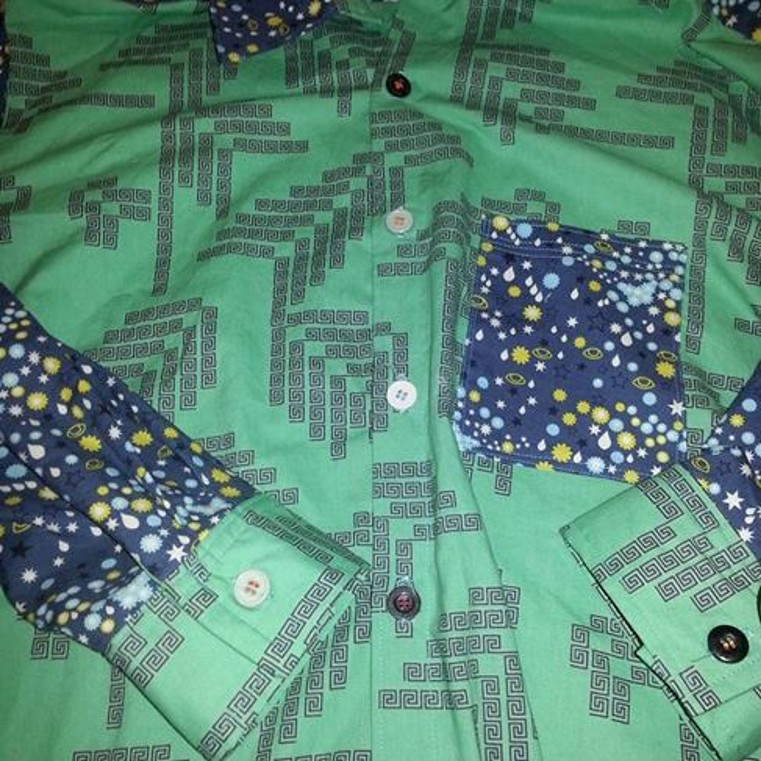 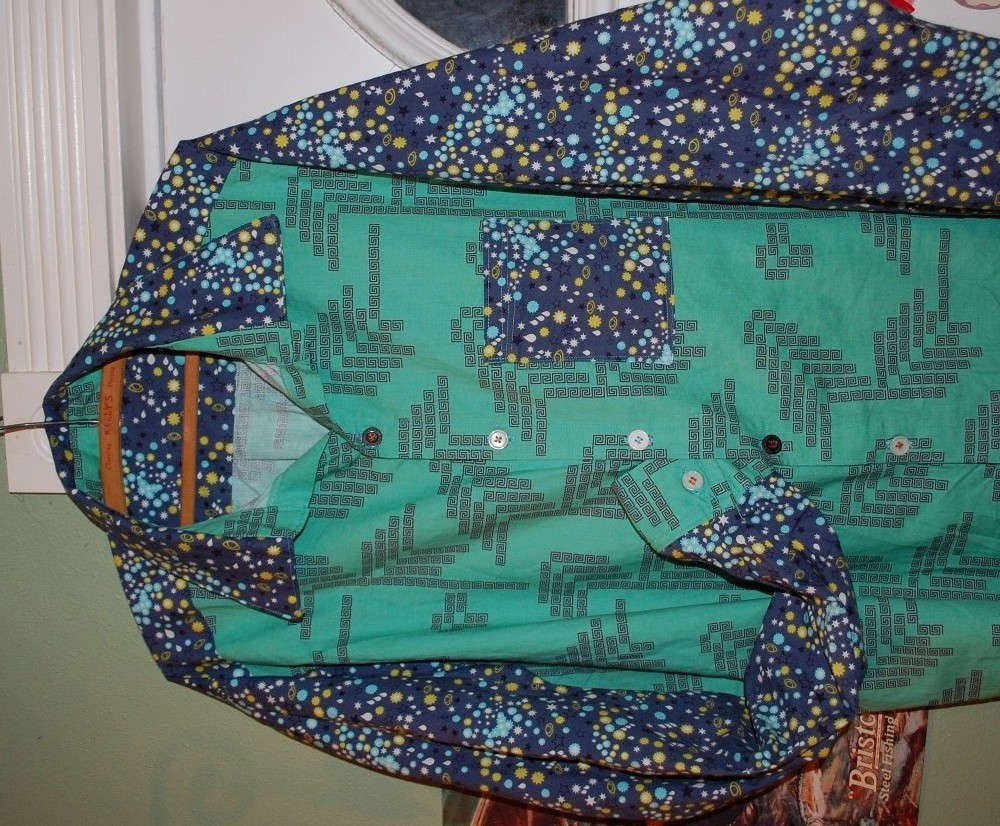 I like it. I originally wasn’t really sure how the green Labyrinth print would work for a shirt. I think it came out pretty decent. I have ANOTHER Free Spirit line to share this month with you too…It will be a post later today…so “technically” it will still be in time to be considered posted in the month of October.

So that’s it for now…there will be another post tonight late….just so I can say it is still in October, but I am sure most of you will be reading it in November.