Finally the big day is here! The first of 12 Days of Color! I have been thinking and trying to plan this event since early November I think.  I hope you enjoy the “tour” of sorts.

To begin with, I thought how fun would it be to just talk and share a little bit about color, and even though I am not a “solids” kinda quilter, I thought it would be fun to feature the newest Kona solids as they are known for their vast selection of solids already(271 to date)…..and they added 28 MORE this fall!! So I thought I would make up a different block from a mix of the New Kona solids and offer prizes at the end of the event. 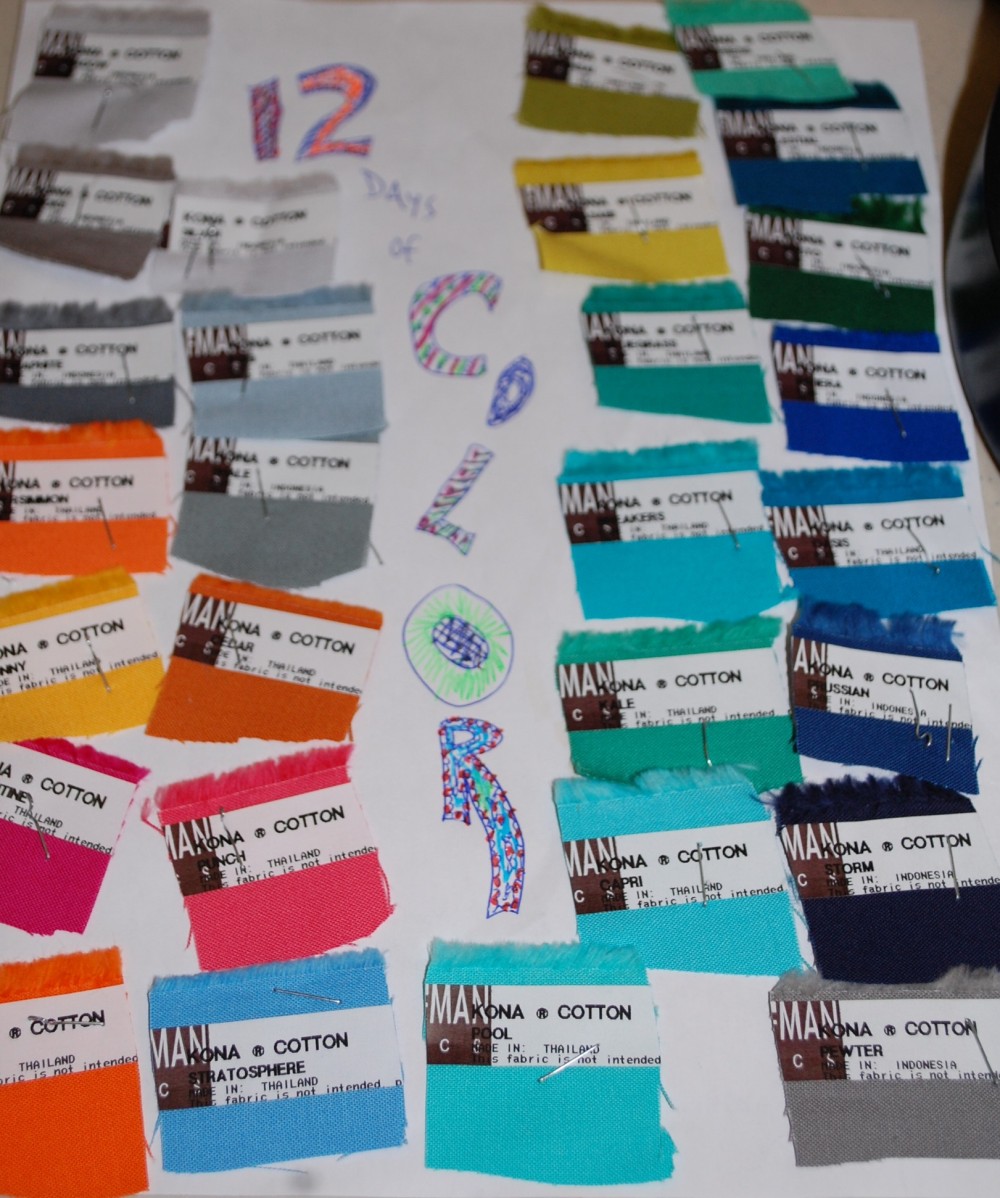 But you know how hard just plain solids are for me, right? (if you didn’t know that, then well…they are)  And I also discovered at Quilt Market that Free Spirit has a new program called True Colors where their designers build and create “blenders”  to work with all of their lines as well as many other lines. And since I am so close to so many of these dear people at Free Spirit, I just felt I had to include them in the event as well.  (and I have to say that these new blender fabrics by the designers are way better than the previous “generic” blenders the company carried in the past!)

And THEN, I just really was drawn to Sarah Jane’s  uber-saturated line Wee Wander at Fall Market as well, so I went traipsing over to the Michael Miller site and found two other lines of theirs that I thought had intriguing color stories, and I felt compelled to add them as well, even thought they aren’t even close to solids.  (and in hindsight, I could have picked Michael Miller DOTS because they have, oh, I don’t know 145,342,515 of them or so…..or their many other wonderful blender type lines, but what’s done is done)

But Wait, there’s more!  And then towards the end of my planning and all, I realized that even though they are not “new” I had  forgotten one of my all-time favorite modern blender fabric lines, Grunge, by Moda.  So I contacted the incredible Lissa at Moda, and got that to share with you too.

I was exhausted already thinking about writing up patterns for 12 different blocks for each day….then I remembered the 2013 Designer of the Month blocks from Aurifil.  Since I am part of next year’s group and I didn’t have time to write all of those blocks up, I would just use this year’s blocks. I told Kim and Pat about my idea, and their enthusiasm garnered YOU some free Aurifil prizes as well!!

So without further ado. Here are the blocks for Day One: 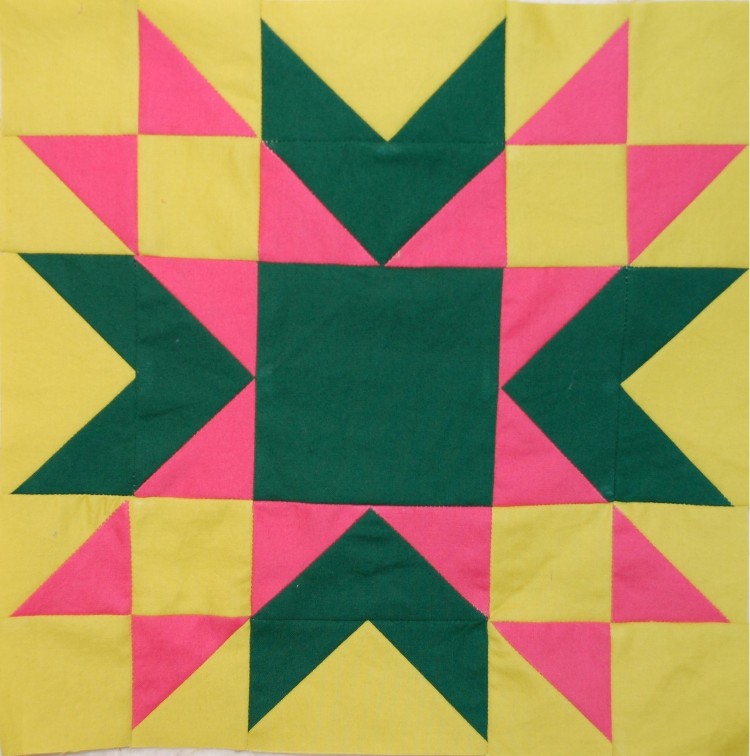 Done in some of  Heather Bailey’s True Colors: 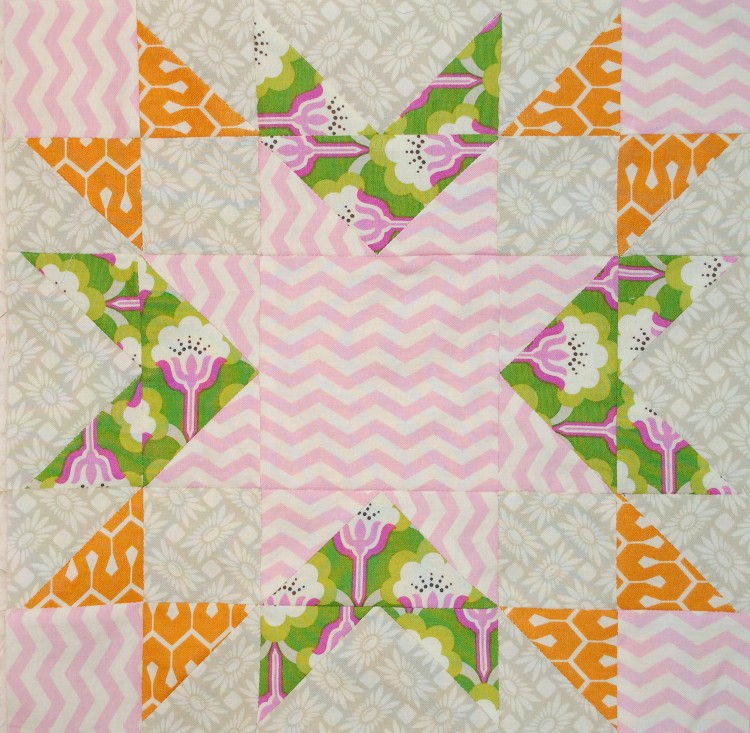 Done in some of  Wee Wander (truly that horse is irresistable isn’t it?): 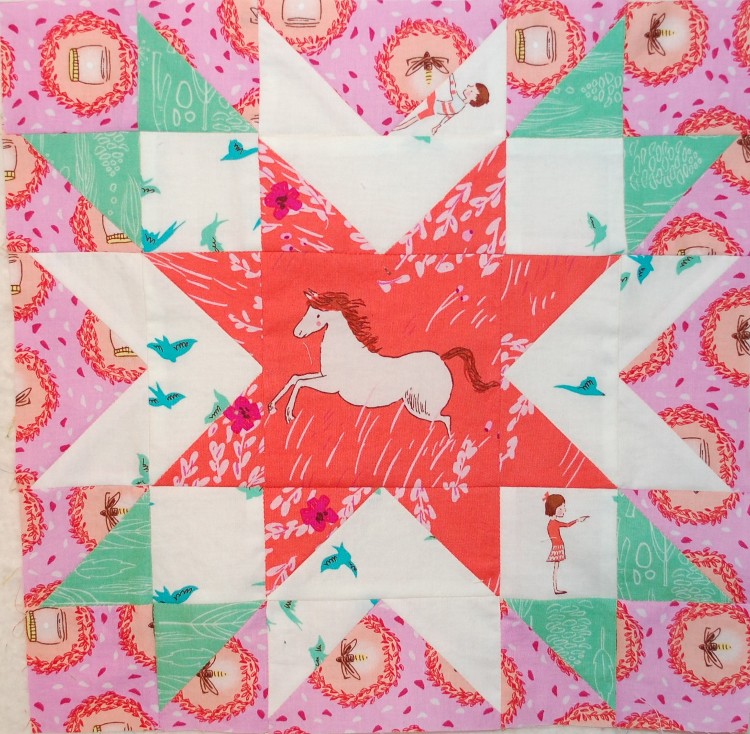 Done in four Grunge colors (no, I didn’t get the individual color names for the Grunges….sorry!) 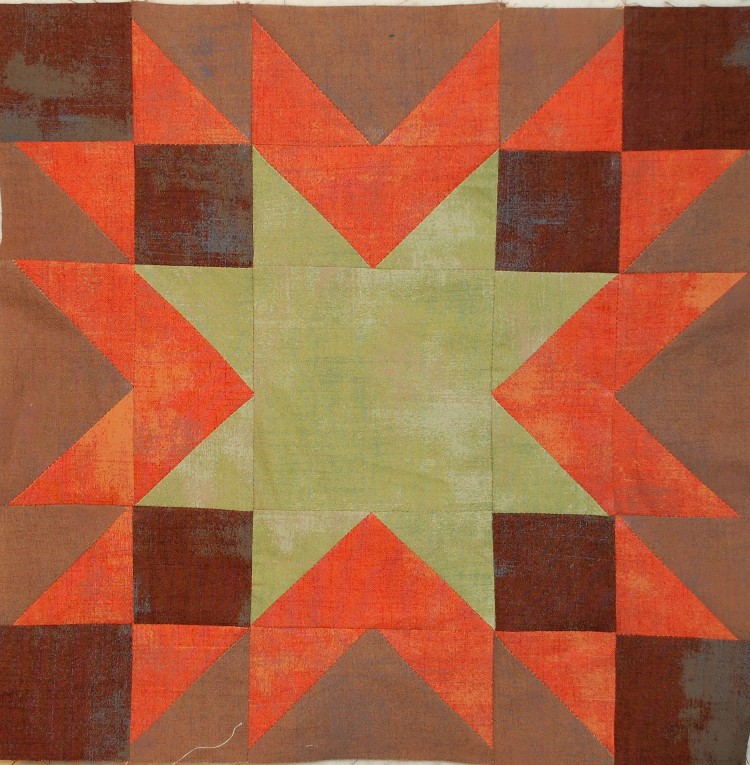 I also thought I would picture two of the beautiful spools of Aurifil floating around my studio each day of the event. These are from my own stash, the ones you win daily are bigger, though slightly less colorful. 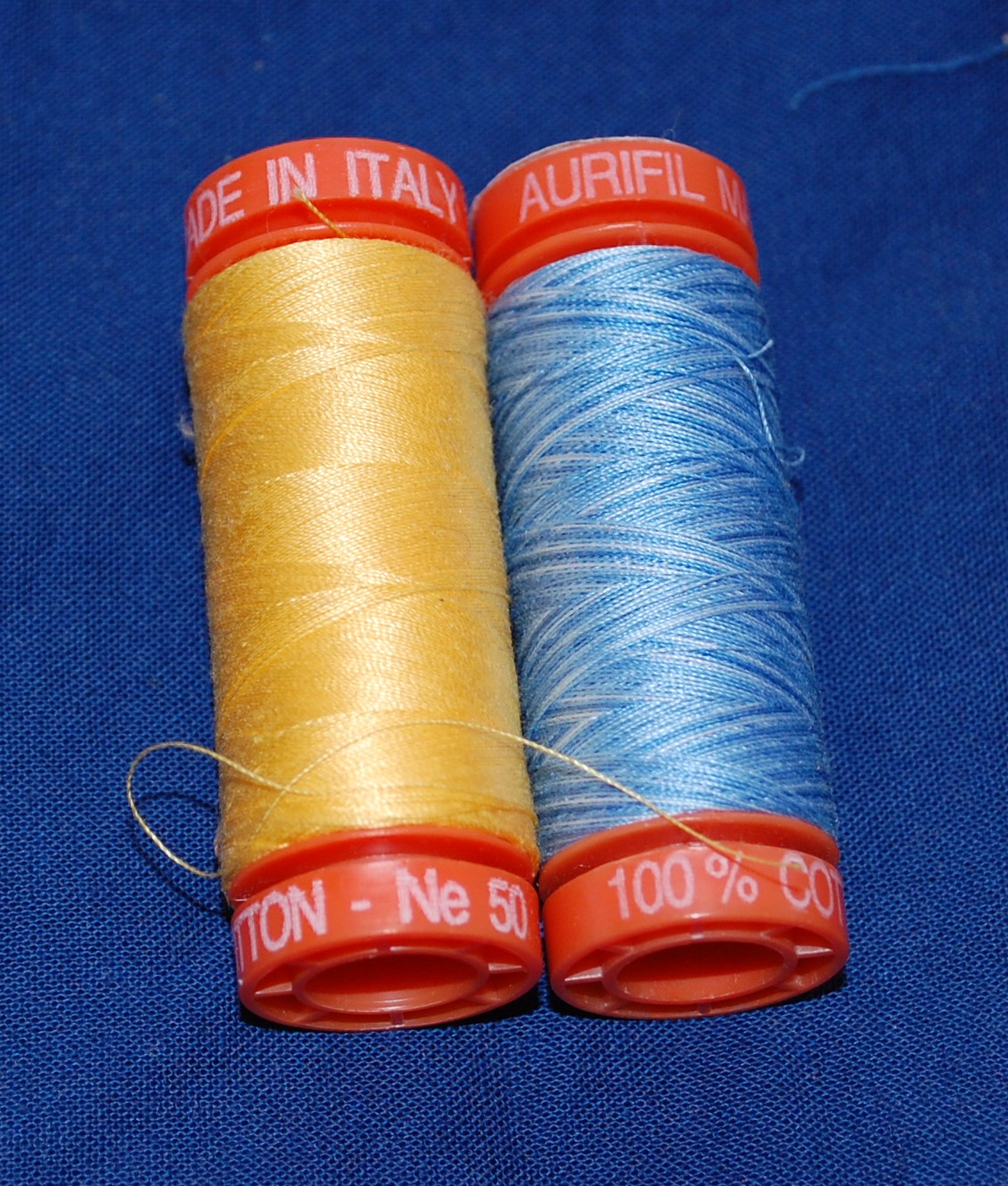 So here’s how it works from the prize angle….Comment on each day of the event. Comments can be on the lines, the blocks, color in general……Every day someone will win a big spool of Aurifil thread, and a couple random Fat Quarter-ish hunks of fabric from one or two of the four companies. 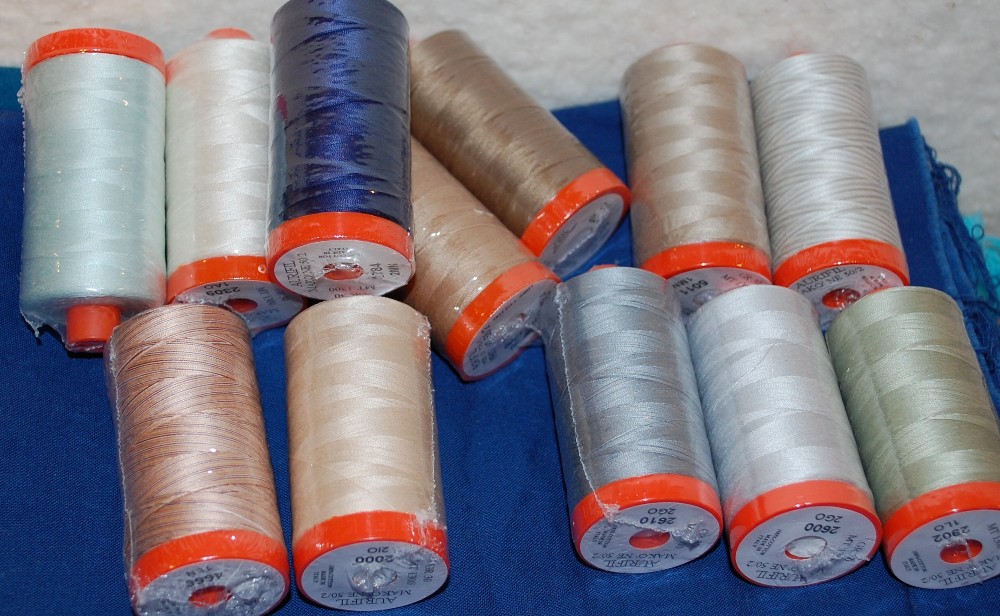 Then at the end of the event, I will draw randomly from each days comments and put those names in the hat for the grand prizes of BIG stacks of fabric as well as this 12 Pack of more colorful Aurifil thread collection set curated by Mark Lipinski: 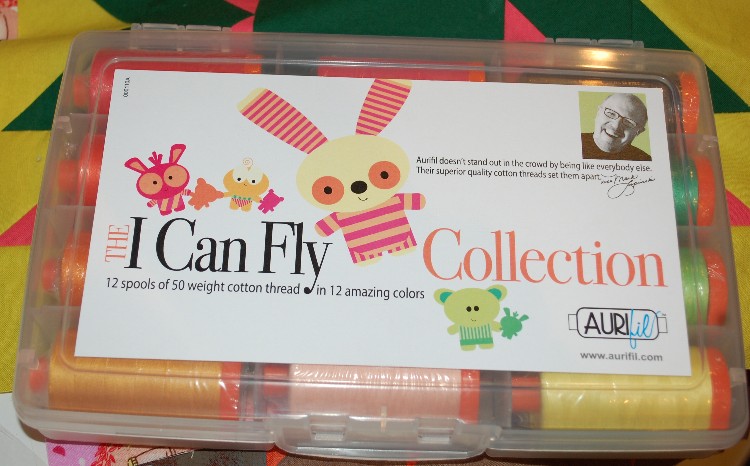 I will have more pictures of the fabric prize packs down the road, and I am trying to get a “grab my badge” button for you to help me share the news about this wonderful trip down the colored fabric road.  Hopefully those will be up here in a couple days. Until then, if you want you can share the old fashioned way by posting a link! I would love it if you would do that.

(what do you think of my logo for the event? I had a blast making that up!!)

So Comment away to win! (and remember…comments have to be approved to prevent spam, so there is a delay on that sometimes.)